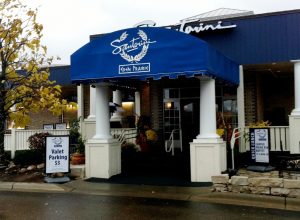 Last week after I dropped my kids off at school I noticed the once well known Santorini Restaurant in Eden Prairie was being demolished.  Many are now speculating what is going to be taking over the prime real estate corner.  I have heard rumors of Krispy Kreme trying to make a comeback to the area, another restaurant, and even a ferris wheel (not sure where that one came from but my kids would love it).  From the conversations going on in and around the EP city hall it sounds like an addition to the SW Station is the most plausible.  With the projected arrival of the Light Rail, the Met Council proposed the removal of two existing buildings, Santorini’s, being one, and adding on to the existing parking ramp.  This addition would of course include additional parking but also an indoor waiting area, more turn lanes and a submerged light rail station.

With the arrival of the light rail being seemingly imminent, it is going to be interesting to see how western Hennepin and eastern Carver County respond.  SW Park and Rides are popping up every where and now with the light rail on the horizon, everything Minneapolis and St. Paul has to offer is just a quick bus or train ride away.

For me personally, I can’t wait to catch the train down to Target Field to cheer on the Twins, pound the Xcel pexi with the Wild, or lose my voice at the new US Bank Stadium while bleeding Viking purple.